It’s not every day you get a request like this but a few weeks ago, the head of catering for North Ayrshire Council popped in to Sugar & Spice to talk about a special celebration dinner for the Queen’s Baton Relay carriers prior to the XX Commonwealth Games starting in Glasgow. Geraldo’s ice cream was to feature on the menu and I was asked to create two new flavours for the occasion.

The dinner was being held over two days for 500 people on both nights and to welcome the teams from Nigeria and St Helena as their special guests. The request was for 24 napolis each of Mango and Lime ice cream along with 1000 chocolate dipped waffle cones and 32 kilos of handmade chocolates. The ice cream was being carried into the dinner on specially designed platters to hold the cones high, resembling the baton, with the chocolates from Sugar & Spice being served afterwards.

I was over the moon to be asked to do it and delighted that Geraldo’s Ice Cream was specifically mentioned on the dinner menu. The excitement in town on the day was fantastic and the feedback has been amazing. Largs was especially busy as the Queen’s Baton made its way into town and across to the island of Cumbrae and the town of Millport where the wood for the Baton came from. On its return into Largs, crowds lined the streets and cheered the Baton carriers as they passed Sugar & Spice and made their way further down the coast prior to the celebration dinner later that day.  Even Magnus, Largs’s Viking warrior on the promenade, was involved when Karen Dunbar posed for photos with the town’s Vikings. 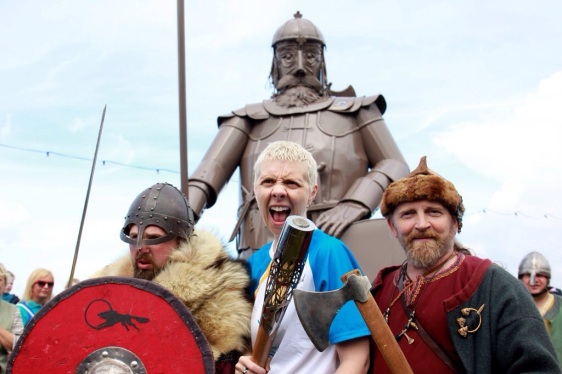 Magnus looks on bemused as Karen Dunbar stops briefly for a photo opportunity with the Vikings of Largs.

After all the hustle and bustle was over I was especially pleased to be able to spend a few hours in the city centre of Glasgow on the day of the opening ceremony. My cousin Maxine was visiting from Singapore and we headed for Buchanan Street for lunch. The atmosphere in town was incredible with live entertainment all around the streets of the city. I can honestly say I’ve never experienced Glasgow as being this much fun and it was clear the city was literally welcoming all nations with open arms.  At 7pm the streets cleared as everyone headed to the opening ceremony or to the nearest TV screen to watch the celebrations unfold.

Buchanan Street buskers made the atmosphere in Glasgow city centre electric on the opening day of the XX Commonwealth Games.

Well done Glasgow and to all the volunteers and contributors involved. You certainly flourished that day!

It doesn’t seem like 3 weeks since the glorious weather we experienced during this year’s 750th anniversary of the Battle of Largs was celebrated in all its glory.

My “babies” and I took part in the opening parade which started at the south entrance of the town and culminated at the Viking Village on the promenade. Largs was full of visitors on the day and I’ve never seen the prom so busy in a long time. There was all sorts of entertainment going on and ‘Sugar’ & ‘Spice’ joined in on every photo opportunity to delight many of the festival goers.

If you haven’t already taken a trip to Largs this year, don’t forget to say hello to Magnus, our new, 16ft high giant Viking sculpture presented to the town by North Ayrshire Council. He was definitely the most-talked about spectacle of the festival and, despite the controversy on where he should be sited, he stood defiantly right in the middle of the promenade beside the fairground attractions, the food and craft tents and the Viking and Scots Villages. Apparently this is a temporary position but no matter where they decide to site him, you can’t miss him.

As always, those Vikings sure know how to party and this year was their biggest celebration to date with over 100 of them staying in the purpose-built villages keeping the night chill at bay with their favourite Moniack Mead – purchased, of course, from Sugar & Spice. The event drew to a close on Saturday, 7th Sept 2013 with the ‘Party at the Pencil’ firework display and the Viking Battle re-enactment on the shore. What a fantastic week it was.

Don’t forget to visit the Vikingar Visitor Centre in Largs if you’re in town and try out the Viking Experience then you can pop in to Sugar & Spice, pick up a bottle of Mead and try out your own Battle re-enactment when you get home.

Haha! Joking of course, but do visit some time and say hello to Magnus!